by Yibing Huang, translated from the Chinese by the author

Wine is sour, smile bitter
The meaning of a still life lies in its stillness
Rows of candle-shaped poplars poked into the body
Hands sunk in the peasant’s cumbersome black overcoat

Yet not a bystander, but with eyes focused straight
Looking at all the heart can’t see
A pen, clumsy and with difficulty
Writes, squeezing out mud, striking sparks

In a place that needs no human gaze
Say, a marsh
Or an island
I’ll bare my feelings

I’ll bare
Such emotions, just as
I sometimes slipped through the barred window of dreams
To pour out tender words by your pillow 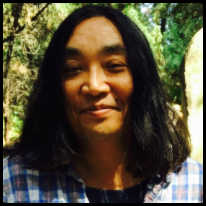 Yibing Huang (Mai Mang 麦芒) established himself as a poet in the 1980s and received his BA, MA, and PhD in Chinese Literature from Beijing University. He moved to the United States in 1993 and earned a second PhD in Comparative Literature from the University of California, Los Angeles, in 2001. Mai Mang is the author of two books of poetry, Stone Turtle: Poems 1987–2000 (2005) and Approaching Blindness (2005). He is also the author of Contemporary Chinese Literature: From the Cultural Revolution to the Future (2007). He published widely on contemporary Chinese literature and art in English language journals such as Amerasia Journal, World Literature Today, Chinese Literature Today, and Yishu: Journal of Contemporary Chinese Art. In 2009 Mai Mang served as a juror for the 2010 Neustadt International Prize for Literature and nominated Chinese poet Duo Duo, who became the first Chinese author to win the prestigious prize. In 2012 he won the 20th Rou Gang Poetry Prize in China. Mai Mang is Associate Professor of Chinese and Curator of the Chu-Griffis Asian Art Collection at Connecticut College. He has curated many art exhibitions including, most recently, Chinese Landscape Rethought (2019) at the Lyman Allyn Art Museum.