IMPORTANT ANNOUNCEMENT: We are not currently accepting new submissions to the journal. Before the journal is active again, please visit our affiliated websites Cha Journal Blog (where we regularly publish exclusive features as well as new reviews under “Cha Review of Books and Films”) and the newly-established Hong Kong Protesting. 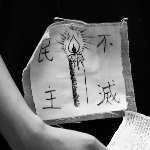 We are very pleased to announce that Issue 44 (June/July 2019) of Cha is now available. It contains the features “Tiananmen Thirty Years On” (editors: Tammy Lai-Ming Ho and Lucas Klein), “Meng Lang” (editor: Tammy Ho) and “Auditory Cortex 2019” (editors: Tammy Ho and Lian-Hee Wee), as well as an impressive Reviews section.

The following CONTRIBUTORS have generously allowed us to showcase their work in the June/July Issue:

Our next issue (Issue 45) will be published in January/February 2020, which will include the “Tech-Xed: Connexions from Hong Kong and Australia” (editors: Sreedhevi Iyer and Jason S Polley) and “Umbrella Movement Five Years On & Beyond” features. The Twelfth Anniversary Issue (Issue 46) is scheduled for publication in March 2020. We are currently accepting submissions for the “Writing Malaysia” Issue (Issue 47) and the deadline for submissions is 14 February 2020. We are also accepting submissions for the ongoing CHA + Tree Hollow Pacific campaign.