She was wearing a blue t-shirt,
anticipating Christmas. Her grey coat’s
left side was taken off to make way for the jab.
The first vaccinated person in the world
was 90 years old and optimistic. You can imagine her smile
behind the mask as hospital staff clapped
when she passed by the hallway in a wheelchair.
The nurse’s face wasn’t shown;
only newspapers here pointed out she’s Filipino
and somehow carried an entire people
along the historic moment. It’s going to be over soon,
she says, I miss my family dearly. She wasn’t referring
to the archipelago. Her being in London
even during,                            especially amid
the pandemic               is accepted as common sense.

Eric Abalajon: The Covid-19 pandemic ushered in a tyranny of images. In its early months especially, people immobilised around the world were flooded with online images, for better or worse, with the internet serving either as a refuge or as a source of disinformation. This development would have a two-fold consequence for the Philippines, a country consistently tagged as the most obsessed with social media. And one whose pandemic response has been dismal—a delay in closing its borders, a lack of mass testing and tracing, militarised lockdowns, an eventual slow vaccine roll-out, and corruption allegations regarding officials heading health agencies.

In my poem “One Image, Two Headlines”, I reflected on the image and meanings derived from the world’s first Covid-19 vaccination administered to Margaret Keenan, an elderly Irishwoman living in Coventry, in the United Kingdom in early December 2020. People over 80 years old, like Keenan, were identified as vulnerable and were hence prioritised to receive the jab. British media, and media in many other countries, highlighted her optimism, proclaiming the beginning of the pandemic’s end thanks to the cooperation of the world scientific community in developing the vaccine. Curiously, Philippine media, using the same image of Keenan’s vaccination, framed the event differently.

It was pointed out that the nurse in the picture, May Parsons, whose face wasn’t even shown, was Filipino. She had been working in the UK’s National Health Service (NHS) for over two decades. For foreign media, this wasn’t a detail worth mentioning. In a tweet, the British Ambassador to the Philippines also stressed the contribution of Parsons and other Filipinos to the NHS. The scramble by Philippine media to be included in a historic moment and to incite some sort of national pride was for me the peak of irony among the images of the pandemic and the country’s history of institutionalised export of labour, especially of healthcare workers. In June 2020, the Duterte administration imposed a ban on the deployment of nurses abroad so as to meet local staff shortages aggravated by the pandemic. The move met extreme backlash and was soon rolled back. Poor working conditions and low pay, caused by sustained budget cuts to public health over the decades, now more than ever, drive healthcare workers to leave the country to support their families. Later studies reveal that Filipino health workers and their immediate communities in destination countries (the UK, and also the US, Spain, among others) suffer disproportionately higher deaths due to their frontline roles.

This poem is my attempt to document the contradictions of that moment, of a single image but with multiple headlines, what it exposes as well as the decades-long crises it forecloses. As the pandemic drags on, specifically becoming a problem primarily for developing countries due to Western countries’ vaccine nationalism, I hope the poem might lay bare how things are, and how they don’t have to be.

[RETURN TO WRITE TO POWER] 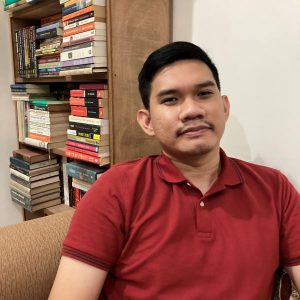 Eric Abalajon is currently a lecturer at the University of the Philippines Visayas, Iloilo. Some of his works have appeared or are forthcoming in Revolt Magazine, Loch Raven Review, Ani: The Philippine Literary Yearbook, Katitikan: Literary Journal of the Philippine South, Pop the Culture Pill, The Tiger Moth Review, and elsewhere. Under the pen name Jacob Laneria, his chapbook of short fiction Mga Migranteng Sandali (Kasingkasing Press, 2020) was included in CNN Philippines’ best Filipino books of 2020. He lives near Iloilo City.