is yellow outside white inside slippery
all over. no can speak
of normality in the east expanse, fortune,
tide and/or guests. has roots but the wrong
kind. proofreads every group powerpoint
in college. is traitor. is fenced
away. is a heart chopped up
for curry. cannot differentiate forty-four
stone lions. cannot explain
why you use -ed and not -ing when
it’s something blended in the blood. is already
splitting. smiles and says nothing. grows
deaf to the music but hears the beat. is veins
bleeding water. can’t help the colour
of their insides. makes the world sweeter
with trying. eats potatoes, mute
and blind. hopes their children won’t
be like them. hopes their children will
overgrow their roots. goes brown and spotty
like the rest of us. kena chop
down. is anyway
anyhow growing growing growing.
.

May Chong: I had a very Anglophone upbringing, with the stereotypical Enid-Blyton-and-Roald-Dahl library growing up. My grandfather studied Latin, my mother taught English, and English has always been my first language. I think in it. I dream in it. It’s more of a mother tongue than my mother’s own Penang Hokkien or my father’s Hakka and Cantonese. None of us spoke very much Mandarin, though a burning desire to read books on Ultraman spurred me to learn Japanese. Much of the little Chinese I’m able to read is filtered through a kanji lens first, which led to one memorable episode: getting a letter from the previous coalition government urging me to vote for them, and being able to read just one phrase: non-confrontational society. In college I ended up in a very Chinese language-centric environment, and one of the unfortunate effects of that was I clamped on to “English speaker” as an identity, rather than just a skill or background detail. I was definitely that nerd proofreading all the presentations for group projects. The years have loosened me up on that, though I’m still a self-identifying banana who makes the occasional small attempt at picking up dialect/Mandarin. I speak more Manglish to the folks around me nowadays. Partly because it’s fun to codeswitch, partly because it’s colourful and bubbles wonderfully off the tongue, and partly because it’s one of the things that makes me feel well and truly connected to my country. 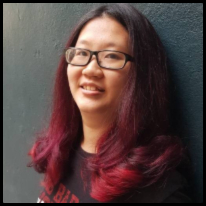 May Chong is a Malaysian poet and speculative writer. After publishing her debut in PJ CONFIDENTIAL (2016, Fixi Novo), her work has appeared in several venues, including Rambutan Literary, Strange Horizons, LONTAR #10 (2018, Epigram Books), My Lot is A Sky (2018, Math Paper Press), Little Basket (2017 and 2018, Fixi Novo), and RECLAIM: An Anthology of Women’s Poetry (2019). May was also a 2019 Rhysling award nominee, and finalist at the first Malaysia National Poetry Slam in 2018. She enjoys birdwatching, great stories, and the worst possible puns, all of which she enjoys tweeting about at @maysays.