They Help the Flowers Bloom

“Can you see that, Grandpa?” the little boy asked, pointing to a bunch of frangipani blossoms.

The old man nodded in agreement, and drew a deep quiet breath, enjoying the sweet fragrance that perfumed the evening.

“They are called egg-flowers,” the boy added in Cantonese. “The white surrounding petals with a yellow centre make each flower look like a sunny-side-up.”

Again the old man nodded, but his nod was broken when his eyes followed a swift brownish body that darted across from a nearby tree, in a silent flight that is also curiously clumsy. The child’s gaze followed the old man’s.

“What’s that bird?” asked the child, eager as always. “There are so many of them, but they fly so quickly, and I never see them clearly.”

The old man smiled. “Ah … they help the flowers bloom. They are the reason why Hong Kong’s streets and parks have these beautifully decorated trees, giving us something nicer to smell than the fumes of cars and the human chimneys smoking death sticks.”

“They help the flowers bloom?” the boy wondered aloud in marvel, thinking that they must be the most beautiful birds in the world, with the sweetest song.

“Yes, but they are also blind, and you can’t hear their song,” added the old man with an air of mystery.

The boy looked confused as he searched the sky for them and was about to interject that they couldn’t be blind since none of them were falling from the sky after crashing into the branches.

“They are not birds. They are bats. They eat fruit and also help spread seeds and pollen. They are an important part of the ecology. They help make Hong Kong beautiful. You know, up close, they have little teddy-bear-like faces.”

The boy kept quiet, and for the rest of the walk home, panned his eyes in hope of seeing another one of these silent and unassuming mammals with flight. He went home puzzled at why so many silly adults had poisoned his thoughts with the false impression that bats are scary and evil. In his little journal, he wrote, “Jun 4, 2009. People gathered at Victoria Park to call for freedom and democracy as I write this. I want freedom, but I cannot get it if I am misled by lies. I need evidence to understand what the real picture is. This is what I learnt from the bat today. Whoever made the bat scary and evil had tried to pass on a prejudice. How terrible if I had believed that lie and thrown a stone at the bat which made my home the nice place that it is!”

They helped the flowers bloom that evening, and all other evenings. What did I do? 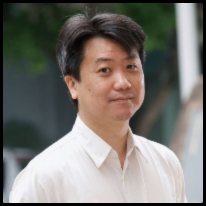 Lian-Hee Wee  is (co-)author or (co-)editor of eight books and numerous research articles. His most notable publications include the monograph Phonological Tone (Cambridge University Press), the journal article “Tone Assignment in Hong Kong English” published in Language (2016) and the essay “Hong Kong Food Runes” in the Spring 2019 issue of World Literature Today. Lian-Hee’s work unravels patterns in Chinese languages as well as Asian varieties of English such as those spoken in Singapore and Hong Kong. He taught at the Department of Chinese Studies at the National University of Singapore and is now Professor of Linguistics at Hong Kong Baptist University. He is the founding director of BIB – Bilingual Improv Brigade 劇劇必興, which is probably the world’s first Chinese-English bilingual Improv Comedy Group. He dabbles with music, poetry, and animal activism. He is the co-editor of the forthcoming “Auditory Cortex” 2019 feature of Cha.