my grandmother’s hands are contoured,
bird-like, small. her fingers meet mine
halfway when we overlie palms,
the depressed ridges of her bones

palpable as I trace the curve of her
knuckles. I try to imagine how these
hands must have felt the first time
my grandfather held them, what patience

must be weathered for two hands to
keep holding onto each other.
in the mint cool of the evening air
I tell my grandmother about the

boy I think I love, our footsteps
drafting shadows and scattering
moonlight underneath. I say, he
taught my heart to make space.

I say, I am afraid of loss.
her contoured, bird-like hands
squeeze mine, and again I notice
how small they are. there is an

incoming rumble as we near the
mrt station and lift our gazes—
carriages of light pass overhead,
illuminated against the sanguine sky.
.

Faye Ng Yu Ci: I learnt and spoke English as one of my two first languages growing up—at home, my father spoke English with me while my mother spoke Chinese, hoping I could live out the bud of a bilingual dream. At school, all our lessons were conducted in English except for mother tongue, while friends spoke mostly English and Singlish (a variant of English localised to Singapore, with a smattering of words from other languages and dialects) among themselves.

I fell in love with English for the first time in primary school, when I discovered the magic of Narnia and Matilda in storybooks. I fell in love with the language for a second time as a young adult, desperately seeking and confused, in the form of poetry.

English is a beautiful language, with a rich history and canon behind it. Through the years, it has given me much—I am grateful for the works of Woolf, Eliot, and Fitzgerald I have read, the old jazz songs on the radio I find myself singing along to, and the friendships I have formed across different time zones, made possible by the common language we speak. There is also a love for the plainness of alphabets, the versatility of embedded rhythms and rhymes.

My grasp of the Chinese language (as well as Singlish) has inevitably informed the way I write in English, the full imagery and tonal cadence of tangshi carrying over to my poems, a phrase of Singlish slipped cheekily into the last line of a stanza. Similarly, the way I hear, and speak, English has been influenced by the accents and acoustics of the other languages I know. I used to be self-conscious and bothered by how I sounded less than “standard” when I spoke English; however, these days, I am mostly comfortable in my own tongue, appreciating instead my unique journey and relationship with the language. 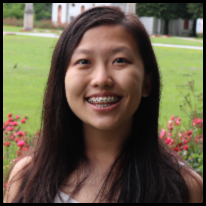 Faye Ng Yu Ci resides in Singapore, where she is journeying through her undergraduate degree as a medical student. She wakes up early in the morning to write. Her poetry has appeared in the Raven Chronicles, Bookends Review, Quarterly Literary Review Singapore, and is forthcoming in The Kindling. She has also been anthologised in Eye on the World: Tomorrow’s Cover, Anima methodi: the poetics of mirroring and elsewhere. She was awarded the Top Award for the National Poetry Competition in Singapore in 2017. She hopes to use her writing to reach out to her patients and share their stories in the future.