Remains Of: Leanne Dunic’s To Love the Coming End

Leanne Dunic’s first novel, To Love the Coming End, follows a nameless British Columbian writer, with roots in Asia, as she travels through Singapore and Japan. Both island nations have distinct relationships to nature, and Dunic connects the end of a love affair to the precarious balance these cultures have to their environments. The tropics invade an abandoned amusement park. A tsunami obliterates towns. Things can, and do, fall apart. We lose control. An end will come.

Wandering alone, sharing conversations had with the ex-lover, strangers and spirits, Dunic paints a picture of a person isolated by grief, struggling to reach out, to make sense of what’s not only happened to love, but how that loss has changed her relationship to the world.

As the novel begins, the narrator, numbed from a long flight and romantic rejection, arrives at Singapore’s lush Changi Airport. This tropical November scene slides into bleaker images of Canada. The same character, still adrift within, observes the repetitively significant nature of the number eleven in history (Commonwealth Remembrance Day), and in her life (we’ll learn later it’s the day she and her ex-lover met for the first time).

Returning to Singapore, the character has become bored, sluggish:

I listen to the radio to immerse myself in Singaporean music. Every station plays the same song by Rihanna. My fingers hurt from opening too many beers. No matter how many I drink I am not cooled in this heat. I’ve become a distended porpoise.

With a practiced traveler’s sensitivity and a light comedic touch, Dunic has deftly set the tone for love’s loss and life’s uneasy numerations. She’s just as quickly settled into a persona that allows her to map as well as mourn, and to repeatedly link personal sadness to quirky cultural encounters and historic pathos: “Former fears: a catastrophic earthquake and for us to be apart.”

The number eleven is truly cursed. 9/11 was Chile 1973 before it was NYC. And earlier this year: March 11, 2011. Certainly, you must have felt it where you are. All those souls. Will Japan ever recover from the curse of eleven? Will we?

Dunic’s geography, built on disaster and remembrance, insistently includes the spirit world. She welcomes an avatar, a huge moth, into her Singapore apartment, feeding him nectar and kindness:

After my shower, the moth flies to my shoulder, leaving a gentle depression on my shirt. Through the night, the moth remains with me. Unsure of what moths eat, we go outside to fetch several Frangipani blossoms, careful of how I move, ever aware of his tender body.

If there is a current of sensibility informing the book, it is this mixture of spirit and substance, inextricably, perhaps infinitely, bound together.

Why does love defy prediction and refuse to be forgotten? Dunic doesn’t answer directly, choosing to imagine the rejected lover drifting like calved ice among larger, inescapable calamities:

Within me, a gaping crevice. The more I change my environment the more I lose track of myself, yet I traverse. Maybe that’s the point. Nothing is anchored. Today is unstable, easy for people and land to split. Minerals grind a geological dance. the balance of the earth’s axis shifts. Chile, Indonesia, New Zealand, Haiti, Japan. Where next?

A practising multi-disciplinary artist, Dunic recognises the formal qualities of this book as a visual object of print and paper. The white surface of a page enhances her prose, giving words luminosity, colour, exploiting the simple, isolated geometry of a sentence or paragraph:

Flame of forest, I kneel beneath an angsana tree. Notebook cradles a rust-coloured moth wing, a jasmine bloom, fragrant no longer. I penciled heat, intended heart. Smudge the line with a damp hand. An uncle passes. sings a slow desire. Shadow of my life, when you are gone …

An admirable first novel, tightly composed, To Love the Coming End is a recollection, a historic calendar, a journal, a sketchbook. Themes of absence and persistence are kinesthetic, which adds a certain sculptural presence to Dunic’s prose. At ninety-two pages, it is also similar to a short film, briefly inviting readers into intimate yet expansive spaces, balancing personal memoir and history. Read once, you’ll want to return to read this book again, like a moth drawn to lamplight, searching for some mark or message sent from the other side of death, or love. 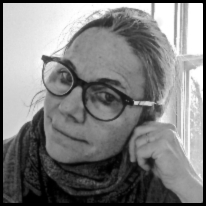 Marsha McDonald lives and works between the USA, Europe and Japan. She is the recipient of grants from the Pollock-Krasner, Puffin, and Mary Nohl (travel) Foundations, and a New York Fellowship. She has received grants and residencies in the US, Denmark, Germany, Sweden, Spain and Japan. Recent exhibitions include the Tate Liverpool (UK), Art+Lit+Lab (USA), and online platforms with Maya Lin and Yoko Ono. She is currently an artist-in-residence at the Lynden Sculpture Garden (USA), and is represented by galleries in San Francisco and New York. She continues to collaborate with writers, poets, and composers. Recent fiction and poems have appeared in Otoliths (Australia), The Cantabrigian, and the Drum (USA).