The day was clear as wish, fresh as vision,
beckoning with the assurance of new history.

That’s how I remember it, anyway,
even if memory has a way of failing.

Memory has a way of failing.

It was 2009 and my foreign friend had forgotten
her passport, only noticing in the streetside queue
outside the square. But we remembered

in China there is always a workaround, pending
one’s willingness to believe a separate truth.

I picked the most human-looking guard
and, face-to-face, told him we were tourists

and Tiananmen had been high on our list.
The truth is we’re leaving the next day,
and what a shame  to have come this far.

His shirt was overstarched, his skin leathered .
Here was a man who might understand

an honest try at a lie, accept the profit of work
and process, the need for a beer and a good joke,

reasons to subvert the mundane promises of tomorrow.

I wondered whether history had treated him kindly
or not at all. Who amongst us actually belonged?

With a sigh, he waved us both through.

Underground, in our single-file queue,
the security guard barked, If you don’t
have your ID, forget about lining, implying
this was the new way, in 2014.

He lost his temper at an elderly pair who knew
no better: Can’t you see everyone waiting?

Neither lines nor order is traditional,
but OK, they said, history has a way of changing.

I handed him my passport, said, I’m here,
in this country, to visit relatives,
uncrumpled a household registration slip
and waited. The line grew longer.

What relatives? he asked. I replied, Laolao, Nainai,
grandparents who lived in front of the revolution
even if they despised it. Now they are dead,
but I leave that unsaid,

choosing the history that will help me.

He looked down, then up, as if pondering
the fates of those who wander without family,
how ghosts ever find their way in the West.

On the sparse Square above, we were made aware
of each person’s presence. As the five-star flag
lowered, there were few gestures, fewer words.
It was rude of us to act like we belonged.

Note: The author was five years old in Beijing in 1989 and lived a mile north of Xidan, where much of the violence occurred on the night of June 3 and early hours of June 4. He remembers gunshots, but it is likely a false memory. He left to join his parents in the U.S. the following spring. 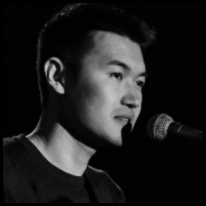 Anthony Tao‘s poetry appears in journals such as The Cortland Review, Prairie Schooner, Borderlands, Frontier, Kartika Review, Cha, Poetry East West, among other places, plus an anthology of China writing entitled While We’re Here. He has a “poetry x music” album called The Last Tribe on Earth, which features his original poetry with original compositions on the classical guitar by Liane Halton. He lives in Beijing, where he is managing editor of the New York-based online media company SupChina. Follow him on Twitter @anthonytao and visit his website for more information. (Photo credit: Eric Favreliere)