I went out to the balcony
for the stars;
in the depth of the winter
neons of a belated new year
flickered at the street corner,
like a distinguished corpse,
tossing down shadows too deep
even for the light.

No men at this hour,
too early for ramblings about tomorrow
and too late
for the regret of a wasted past to come in
after 30 years.
Better to sleep and have a bad dream.
The air had put ice on the lock.

Down on the square,
a student had ripped himself
in half;
One part on the eastern sky
like a red flag soliciting
the sunrise;
and the other stood vigilant
in the city, lost
to a rally of gunshots.
Silence hovered like doves
above the vehicles charging
towards him
and settled
on the newspaper, as if
it were a necessary testimony.

3 am,
I searched the sky
for witness—
No moon, few stars. 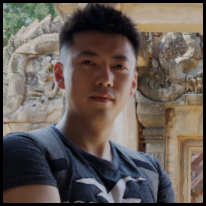 Aiden Heung is a native Chinese poet who was born and raised on the edge of Tibetan Plateau. He holds an MA in literature at Tongji University in Shanghai where he currently works and lives. His poems are mostly China-themed and have been published in many online and offline magazines, most recently in New English Review, Literary Shanghai, The Shanghai Literary Review, Anak Sastra, A Shanghai Poetry Zine, The Thirty West Publishing house, Ink in Thirds Magazine, The Laterals Magazine, among other places. Aiden writes in English and Chinese.