inside there okay anot? hot not?
nah—got flowers. chrysanthemum. got pu’er cha,

anymore, only the temperatures and sea level all.
all dying first. damn scary leh. you alive ah,

i think maybe you will cry. you always very sensitive one.
everything makes you sad, especially when they die.

your death was the only one you never cry at, right?
i’m not trying to be funny. nothing is funny

anymore. we’re listening to the same music
you listened to when you were small. we’re stuck

buying things we don’t need and eating at new places
like the food is new like that. we kena cheated,

think every week got new thing, got thing grow, we grow
also. but actually never. not dying, but also not living.

nah, i play lin zhi xuan for you. nice not? you got like any
local singers before? they now quite good, got standard one.

that singapore like quite cool. not so paiseh like
the mediacorp stuff. eh, outside here so hot you must be

Ang Kia Yee: I grew up speaking English, Mandarin, and Singlish, but also listening to my parents and grandparents speak Hokkien and Henghua. (The latter two I can understand to an extent, but cannot speak.) In Singapore, my education was entirely in English, except for Mandarin language lessons. This was complicated, however, by my enrolment in a school which emphasised Chinese language and culture. As such, the demands on my Mandarin ability were heightened (in expectations and actual academic requirements), and I was dragged (by my mother, myself, and my teachers) into fluency.

As I had a flair for English, it became the language and subject I pursued most passionately. Ironically, I didn’t question this until I came to Britain for my undergraduate studies in English Literature and Creative Writing—my postcolonial consciousness brought out of slumber in the heart of the empire. I’d always had a hang-up about white people and the dominion of their national politics, arts, and cultures as ‘global’. But this was the first time my attention was turned sharply upon language as a field of power, especially as I tenderised my Singlish and ‘accent-less’ English into something more palatable to the British. Yet English undeniably gave and still gives me a vast amount of power and access, and that is the trickiest part: my English and I are neither totally marginalised nor centred.

What English means to me now: a third (biological) parent. Because it has always been part of my body, and I cannot shed it. Worse still, I love it. It is a field of power I was born into as privileged participant, and the language in which I have the most precision and range. I want to use it, but I also want to reduce its hold over my life and my work. Having taken time away from Mandarin (I was exempted from studying it since sixteen), I have come to love and want to return to it. It no longer means less to me than English does. I have also begun learning Hokkien and Korean on my own. Thus, what English also means to me now: one of many skins and fragments of self. 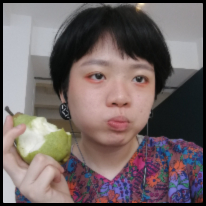 Ang Kia Yee (b. 1996) is a Singaporean Chinese writer and artist. Her practice is situated in text, image, and performance. She has been published in Quarterly Literary Review Singapore and the anthology Twin Cities: An Anthology of Twin Cinema from Singapore and Hong Kong (Landmark Books, 2017), and was a runner up for the 2018 Bi’an Awards. She last performed in Saint Somebody at Camden People’s Theatre, and had work exhibited as part of Coming Between, Becoming. She is an Assistant Editor at Reinvention: an International Journal of Undergraduate Research. Visit her website for more information.