by Liu Xiaobo, translated from the Chinese by Ming Di

TO MY GRANDFATHER
—after Liu Xia, and on behalf of Xia who has never seen her grandfather

Epigraph: Dear Xia, you’ve talked to me a great deal about your maternal grandfather, even though you’ve never met him, you’ve talked in a way as if you grew up under his wings. But your knowledge of him is limited to the following: he studied at the Beijing Normal College in his early years, participated in the May 4th Movement and was one of the students arrested. Later he became an open-minded gentleman, a county magistrate during the days of the Republic of China, and he managed a farm as well as a school. After 1949, he was oppressed as a “historical counter-revolutionary” and died in solitude in the red prison in the early 1950s. He had four daughters and one son. But none of them ever told you about him, your grandfather, so you hate your mother for that. As a result your grandfather becomes an immortal soul that can never be erased from your mind. Time after time he becomes my grandfather—not genetically but spiritually. I’ve written to you from prison page after page about our grandfather, and his undying soul has indeed become my ancestor.

I’ve never met you, grandfather,
nor heard any stories about you
from mother.
Sometimes I would mention you
in front of the whole family intentionally, then
look intensely into mother’s eyes
but not knowing what exactly to look for.
You died in the red prison
alone, without drafting a will.
I can’t see in mother’s eyes
an old man under an osmanthus tree
nor can I see the shadow that
stays in my mind. A shadow lingering.

Grandfather, your cottage is too small to fill
with a living will you want to leave to your grandchildren.
What I can leave you
is my heartbroken crying, eyes bloodshot,
in my dark loneliness. I cry for you and
for my husband in jail. And all I can give you is
my spiritual struggling.

Do you smoke grandfather?
Even if you don’t you have to
take a puff with your granddaughter, now.
I’m sure you drink, grandfather,
as there’s such strong liquor in my blood,
inherited from you.
Duras, who could be my grandmother and who died
from drinking, wrote poems to me.
She taught me how to write with wine.
Is it your conspiracy with her that
I started drinking at a young age?

Grandfather, don’t look so serious.
I can’t live up to your staring, not as a soul.
One night when it’s dark, so dark as to its transparency,
I will smile for you, cheerfully,
making a big horse face
with elevated expressions
while my gang of ugly baby dolls
pray for your dead soul.
Never mention your past as I’m already tearful
in the mirror.
Forgive me grandpa—
in hopelessness I lean to memories.
My darkness lightens you up
on a stormy night.

There, a dreamy osmanthus tree
stands before the window of your old cottage.
A leaf refuses to stretch out,
shameful of your offspring.
It’s a blessing reward from the heaven
that I become your crutches.
If you’re wandering in the sky, for real,
I will trim your overgrown fingernails with the wings
of a flying bird.
If you are lying awake under the ground,
the tough stones and moisture of the soil
carry my whisperings.
I want to be an ant or an earthworm
just to get closer to you, an undying soul in a wrongful death.

I know, grandfather, the lyrical lines,
even though ever-lasting through remembering,
may seem too elegant, too timid,
compared to this horrible era.
It’s through the familiar iron windows
that I see your hopeful eyes reflecting the tilted images
of your children and grandchildren.
You left us such time—
never filled with tears or regrets—
that becomes a striking void
in the general indifference, avoidance
and forgetting.

Grandfather, have you seen the policemen
around me around the clock?
They know me so well like my own fingers.
They search every corner in my room,
robbing me of almost everything in writing
but they just can’t find your will.
The empty darkness belongs to you and me
and your world is richer than mine.
I must take your curses
like a woman must endure monthly pain. I will
safeguard your will and kneel down for my mother
in front of your tomb.

[Translator’s Note: Liu Xiaobo wrote many poems for Liu Xia in Liu Xia’s voice while in prison. And this is a verse letter to Liu Xia’s maternal grandfather, Xiang Daguang, one of the eight prominent students in the May 4th Movement who were arrested and jailed. Liu Xiaobo and Xiang Daguang were alumni of the Beijing Normal University, known as Beijing Normal College in the early 20th century. In this poem, Liu Xiaobo imagined an unwritten will that the grandfather would have left behind, possibly implying that he himself was carrying on the wishes in the will to fight for democracy in the 1989 Student Movement, a continuation of the struggle for democracy and political reforms in China. The poem also reveals that Liu Xia was under house arrest as early as in 1997 when Liu Xiaobo was sentenced to three year imprisonment in 1996 for speaking out on Taiwan and Tibetan issues.

This year marks the 30th anniversary of the June 4th massacre of 1989 as well as the 100th anniversary of the May 4th Movement of 1919 when Hu Shi, among others, promoted democracy and New Culture including free verse of vernacular language which Liu Xia and Liu Xiaobo experimented with in their exchange of writings. This particular poem along with the epigraph presents a broader picture of the overall democratic movements in China and brings to light new meanings of the 1989 movement as we look at it today, 30 years later.] 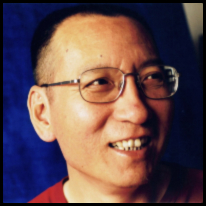 Liu Xiaobo 刘晓波(1955-2017) (author) was a Chinese writer and literary critic. After finishing college in his hometown in northeast China, he went to Beijing Normal University for MA and PhD and became a lecturer there in 1988. He published extensively in the 1980s and went abroad as a visiting scholar. In May 1989, he returned to China from NYC to join in the student movement in Beijing. After the June 4 th crackdown, he was jailed as a “black hand” of the 1989 protest and therefore fired from his teaching job. He was made to confess on national TV about “no killings” at Tiananmen Square, and he spent the rest of his life as a human rights activist making it up for what he “confessed”. He was awarded the Nobel Peace Prize in 2010 while in jail again for advocating Charter 08. He died as a political prisoner and his ashes were spread to the ocean.

Ming Di (translator) is a Chinese poet with six books of poetry and four in translation including River Merchant’s Wife(Marick Press. 2012). She studied English literature in China and linguistics in the United States and taught Chinese at Boston University before moving to California. She edited and co-translated New Cathay: Contemporary Chinese Poetry (Tupelo, 2013) and New Poetry from China 1917-2017 (Black Square, 2019). She received Luce Foundation fellowships in 2013 and 2014. She also translates from English into Chinese, most recent publication being Observations by Marianne Moore (Sichuan Wenyi, 2018). She is the co-translator (with Jennifer Stern) of Liu Xia’s Empty Chairs (Graywolf Press).