by Xi Chuan, translated from the Chinese by Lucas Klein

The beast, I see it. The beast, fur thick and stiff, teeth sharp, eyes nearly lifeless. The beast, gasping for breath, growling ill fortune, and from its feet, no sound. The beast, with no sense of humour, like a man straining to hide his poverty, like a man ruined by his mission, with no cradle to provide memories, no destination to locate yearning, not enough lies to plead for itself. It smacks a tree trunk and gathers infants; it is alive, like a cliff, and dead, like an avalanche.

A crow among scarecrows searches for a partner.

The beast, it despises my hairstyle, despises my scent, despises my repentance and reserve. In a word, it despises that I deck out happiness in baubles and jewels. It squeezes its way into my room, orders me to stand in the corner, and with no word of explanation collapses in my chair, shatters my mirror, shreds up my curtains and all that belongs to my spiritual defense. I beseech it: “Don’t take my teacup when I’m thirsty!” Right there it digs up a spring, which I suppose must be some kind of response.

We call the tiger tiger, we call the donkey donkey. But the beast, what can you call it? Without a name, its flesh and shadow are a blur, and you can barely call it, can barely be sure of its location in broad daylight or divine its destiny. It should be given a name like “grief” or “embarrassment,” should be given a pool to drink from, should be given shelter from the storm. A beast with no name is a fright.

A song thrush does away with the king’s foot soldiers.

It knows temptation, but not by a palace, not by a woman, and not by a copious candlelit gala. It comes toward us, so is there something about our bodies that makes it drool? Does it want to slurp up the emptiness off our bodies? What kind of temptation is this! Sideways through the passageway of shadows, colliding head-on with the flash of a knife, the slightest hurt teaches it to moan—moaning, existence, who knows what stuff belief is made of; but once it settles down, you hear the sound of sesame at the jointing stage, you catch the scent of the rambler rose.

The great wild goose that clears a thousand mountains, too shy to talk about itself.

This metaphorical beast walks down the slope, plucks flowers, sees its reflection by the riverside, and wonders inside who it could be; it swims across the river, climbs ashore, and gazes back at the mist on the river, with nothing to discover or understand; it rushes into the city, chases girls, finds a piece of meat, and passes the night beneath the eaves, dreaming of a village and a companion; sleepwalking for fifty miles, knowing no fear, waking in the light of a new dawn, it finds itself returning to the location it had set out from: that same thick bed of leaves, the same bed of leaves still hiding that dagger—what’s going to happen?

Pigeon in the sand, you are enlightened by the sheen of blood.
Oh, the age of flight is near! 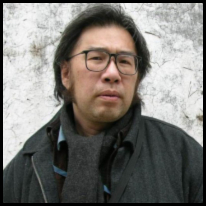 Xi Chuan 西川 (author),  penname of Liu Jun 刘军, was born in Jiangsu in 1963 but grew up in Beijing, where he still lives. One of contemporary China’s most celebrated poets, having won the Lu Xun Prize for Literature (2001) and the Zhuang Zhongwen Prize (2003), he is also one of its most hyphenated littérateurs—teacher-essayist-translator-editor-poet, and has been described by American writer Eliot Weinberger as a “polymath, equally at home discussing the latest American poetry or Shang Dynasty numismatics.” A graduate of the English department of Beijing University, where his thesis was on Ezra Pound’s Chinese translations, he is currently professor Creative Writing at Beijing Normal University. He was recently awarded Sweden’s Cikada Prize. 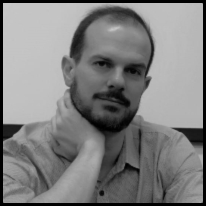