A Writer of Rare Sensitivity: Sumana Roy’s Out of Syllabus: Poems

Sumana Roy’s first poetry collection, Out of Syllabus, is the culmination of years of writing from a writer whom I primarily consider as a poet, but has already published two books of prose. She must have been tentative, to say the least, about publishing a book of poems in these unpoetic times when everything except poetry sells. But any true poetry lover would be glad that she had decided to publish this collection which has her poetic genius written all over it.

Out of Syllabus is a collection of thirty-five delectable poems. I say delectable because the collection is a feast for the senses. As Professor J. Hillis Miller says in the blurb, the book “combines rational ordering with the ‘unreason’ of striking figures of speech.” This “rational ordering” comes from the sectioning of the poems under subjects that one would usually study at the high school level. Starting with Mathematics, she goes through History, Chemistry, Biology, Physics, Geography, General Knowledge, etc. right up to Art. Interestingly, there’s no First Language, but only Second Language.

Roy clearly loves her quotes as every chapter begins with epigraphs taken from known and relatively unknown writers, artists and philosophers. For example, she chooses these words by Agha Shahid Ali for History: “My memory keeps getting in the way of your history.”

Or Pablo Picasso for Art:

But is there a common theme running through these subjects? That is a difficult question to answer, as she takes us on a journey of life as she has seen and felt around her. As one finishes reading the collection, the reader might sigh in wonder at the range of thoughts and emotions expressed throughout the poems. There’s much that might appear familiar yet presented in unfamiliar light. Mathematics, for example, becomes a marriage where “the third is a betrayal.” Biology is “illness in instalments.” Botany isn’t about living plants and trees but about “the afterlife of trees and their lovers.

Roy’s poems try to balance the private and the public as she flits between the “home” and the “world.” She makes us squirm uncomfortably on the social ritual of celebrating marriage anniversaries:

Anniversaries are wall paint, a smoothening of pores.
They bring colour to the skin of a marriage,
and hide cracks where parasites evade mores.

She also painfully recounts the horrors of the rape of a five year-old girl in Delhi in 2013:

There were bottles inside you, and male snot.
A syringe in your hair. A button in your palm.

Indeed, her poetry has the dissociation of a long-distance relationship and yet the intimacy of a letter written to a loved one.

Robert Bridges wrote, “Poetry’s magic lies in the imagery which satisfies even without interpretation … it is accepted as easily as it was created.” Indeed, the magic of Roy’s poetry lies in her imagery as she sets off a cascade of images in poem after poem. She will surprise you. Take these lines, for example:

The window is a camera with a perennially open aperture.
The bed is a roadless park.
And life is as temporary as a ladder.

In one of my favourite poems from the collection titled “Sadness,” sadness takes on images of white as it becomes “a white crane on a white cow” or “white hibiscus resting on a fence” or “a museum, pictures on white walls.”

Sumana Roy is a writer possessed with rare sensitivity, and Out of Syllabus is a look at our inner and outer worlds from her perspective. Her poetic craft is a triumph in rhetoric. Every figure of speech she uses attains a new meaning—much like the shadow in the cover photograph (which is brilliantly taken by Bhaskar Kundu, by the way)—in the light of her poetic gaze. 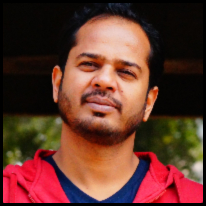