The Avenue of Eternal Peace by Numbers No. 2

by numbers Military (of a drill procedure, etc.)
performed step by step, each move being made on the call of a number

100 flowers did not bloom on Tiananmen Square.

5th June
1989
2nd day of the
5th month of the year
4687 on the Chinese calendar
1 man
2 plastic shopping bags
1 in each hand before a column of
18 Chinese Type
59 tanks on Chang’an Avenue (the Avenue of Eternal Peace)
1 minute from Tiananmen (the Gate of Heavenly Peace)
1 day after “the square has to be cleared by
6:00AM”
400 cities of uprising by mid-May
300,000 troops by most counts
2,600 dead according to the Chinese Red Cross
241 dead according to official Chinese government figures:
218 civilians (of which
36 were students)
10 People’s Liberation Army soldiers and
13 People’s Armed Police
7,000 wounded:
5,000 PLA and
2,000 civilians
1 man’s fate unknown but “I think never killed”. 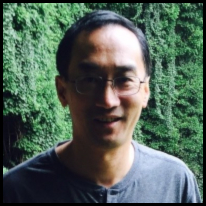 Ken Chau is a poet living in Melbourne, Australia. His poems have been published in Australia, China, France, Hong Kong, India, Singapore, UK and USA. They have also been anthologised in Growing Up Asian in Australia (Black Inc., 2008) and exhibited at POETRY: a text and word-based exhibition at the George Paton Gallery, The University of Melbourne. Ken’s collection Possible Lyrics for Chinese and Western Pop Songs (Bendigo Publishing, 2015) won the Vox Bendigo Fyffe Prize.