Twenty Years in the People’s Republic of China

“There will be,” said my new boss,
“a Party plant in your classroom.
Tiananmen never happened.”
I was sitting in her office
at Centennial College in Toronto.

For National Day my students
took me hiking. To Zhangjieje—
China’s first forest park because I saw trees
in the Xi lanhua—broccoli in our lunch boxes,
in the brittle, bare whisk brooms
leaning upright by the caretaker’s hut.
Wicker baskets of birds at the gates.
The students helped me buy a small pheasant—
feathers dry, brown as leaf litter—from a hunter.
They climbed with me
half way up Doupeng mountain
where I released the bird.
Its rapid wing beats sliced cloud
from the sky. Some students laughed.
“The bird will be caught again
by a hunter,” a girl insisted.
Descending the steep slope two students
asked what I knew about the Tank Man
at Tiananmen. A tall boy said,
“Anti-China propaganda.”

Nine months until I repatriate to Canada.
I am on the Lantau trail neck deep
in flush-pink petals parted for butterflies,
Hong Kong’s silver skyline hidden by the mountain.
An eagle owl on a tall pine
pivots his head after leaf rustle.
I can hardly believe only one more spring
on these mountain trails.

Outside my window, peaks across the bay
cloaked in smog. I cannot risk travel to the mainland now,
my poems about my Hong Kong students’ protest
umbrellas blooming in a mist of tear gas—seditious.
Canadian diplomat Michael Kovrig
waits in a cell where the lights never go out.
He can’t sleep, but his spirit still roams China.
I yearn to walk the edge of Tiger Leaping Gorge
in Yunnan, skirt its deep, dark mouth.
I yearn to climb Emei Shan with the pilgrims.
My yearning enters my dreams:
I am holding the pheasant
whose heart beats fast. I release it
and over and over
it is shot. A red-brown flurry
drops at my feet on the forest path.
Ribs poke through; the heart’s in shreds. 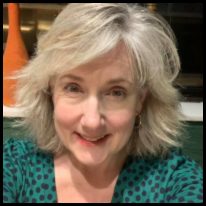 Poetry by Kate Rogers has appeared in, among other places, World Literature Today, the Fieldstone Review (University of Saskatchewan), Tamaracks: Canadian Poetry for the 21st Century, Algebra of Owls, Voice & Verse Poetry Magazine, Twin Cities: An Anthology of Twin Cinema from Singapore and Hong Kong-Singapore, The Guardian,  Asia Literary Review, Environment and Culture, Many Mountains Moving, and Kyoto Journal. Her poems won second place in the 2018-2019 Big Pond Rumours Contest. They have been shortlisted for the 2018 Vancouver Tagore Society Contest and the 2017 Montreal International Poetry Prize. Kate’s latest poetry collection is Out of Place (Quattro-Aeolus House, Toronto, 2017).