The email comes silently
As if
Afraid of unnecessary notice from strange eyes.

The attached drawing,
Draft of a restaurant interior,
Surface-painted with the color
Of
endura bronze.

But a cluster of arrogant words,
Incoherent,
Crude,
Asking aloud
To seal the business with a number.

Out there somewhere.
In Shanghai,
On the top floor
Of a very old building,
A fancy place will be born,
Pub & Grill
They call it.
Very western,
Different
From all traditional styles.

The way it should be
As hinted proudly
By the sender’s broken English.
/

Aiden Heung: The story started quite simple. A small town boy in western China, living a thousand kilometres away from his parents, whom he didn’t meet until he turned eighteen. He found no companionships but in books, in novels that staged all-too-unfamiliar stories of other people, or in poetry, the passion of his life, which gave voice to things he was too timid to express. Needless to say, the urge to understand better his favourite writers made him pick up an old-fashioned dictionary and started to teach himself English with the help of a curious English teacher. Then the boy went to college to study business (as all Chinese parents wanted their children to do) but spent his years on books and writings, later successfully got admitted to an MA programme in literature, fell in love with a man, settled down as a salesman while at the same time trying and failing to get admitted to his dream MFA programme in creative writing (poetry). Really, it was a life of a stereotypical book lover with an unhappy childhood.

For him, to know another language well was to open up a different world—for learning a different language in no way offered comfortability, it only took him to a limbo-like place where he was trapped. He didn’t belong either yet always trying to find a linguistic home, always torn between their conflicting ideas and values. But the strange beauty came, the realisation that it was precisely this torn-ness that offered him the transcendental freedom to ask questions and to know more.

They say in medieval times, a good troubadour must be well-versed in many languages to sing. 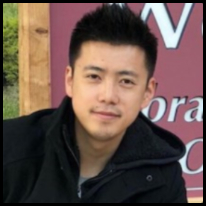 Aiden Heung is a native Chinese poet born and raised on the edge of Tibetan Plateau. He holds an MA in literature from Tongji University in Shanghai where he currently works and lives. His poems have been published or are forthcoming in many online and offline magazines, most notably in Cha: An Asian Literary Journal, Literary Shanghai, The Shanghai literary Review, New English Review, The Bangalore Review, Mascara Literary Review, A Shanghai Poetry Zine, among other places. Aiden is an avid reader who writes both in English and Chinese. Visit his website or Twitter for more information.