I choped you a place on earth

Stop saying you got somewhere else in mind

or that this and only this can happen ah-but-then

fuming away at full blast

lighter than a tomorrow-free cloud

darker than a god-infested tree

(Don’t know how to breathe you back in lor)

Stop saying tear down this temple

and I’ll rebuild it in three days lor

just tekan every angel into despair

You got problem we settle outside

outside DNAs and mythologies     outside your stupid deathbed

I don’t need your resurrection

Chope = To hold or reserve something (e.g., an empty seat) for someone.

Ah but then = “What else do you expect?”

Tekan = (Originally Malay for “to press down”) To scold or abuse.

Settle outside = To go outside and bring a dispute to an end (suggestive of violence).
.

Ng Kum Hoon: English is part of my personal facticity, a givenness of the particular gestalt of life I became ensconced in. Much like the parents I was born to without my having any say in the matter.

When the languages I use (inclusive of English) cast a reflexive gaze upon themselves through my eyes, only feelings of inadequacy and gratitude loom large. I am thankful for the windows and rabbit holes opened to me by English since I first learnt in 1980 that dogs “bow-wow”. Yet I am also constantly aware of how incompetent I am at wielding this prosthesis—or, for that matter, Mandarin and Cantonese too, as well as the smattering of Japanese that is beginning to spread over me. No amount of learning or pretence can bridge this chasm of shame. This is hardly surprising since all human constructs have always felt equally distant to what I am at heart. Until I return to that place where dogs bark beyond onomatopoeia, noun classifications and syntax, I will never be quite at home, I suppose. 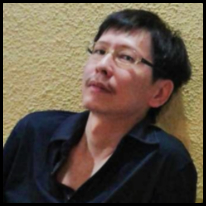 Ng Kum Hoon, born and raised in Singapore, teaches translation and Chinese history/literature at the National University of Singapore. Apart from over 120 movie reviews, he has published more than 200 original articles, short stories, poems and translations in English and Chinese, which are scattered across various publications. He has also humbly received a number of literary prizes and awards from different countries, including Singapore’s national-level Golden Point Award (twice). He is perennially spread too thin over an ever-growing sprawl of scholarly, aesthetic and autological interests from Japanese animation to geometric occultism.