I hadn’t realised until I bought
That day’s South China Morning Post and saw
The headlines, then it hit: the fourth of June,
And twenty-five years on a date still taut
With meaning here; that’s why at three or four
I took the harbour ferry from Kowloon

To Central then walked east to Causeway Bay
Through streets where buildings stood like solid light
But where the skirl of profit numbed the ears,
Past restaurants, pubs and the quaint displays
Of go-go bars, which coaxed approaching night,
Until the entrance to the park appeared.

I went in, browsed the rows of little stalls,
Donated what I had to the campaign
By mothers of the dead, then found a seat
And settled to reflect on why it falls
To youth and manual labour to restrain
The malice of the state, and how defeat

May bring them accolades or calumny.
But sitting there I felt my gut grow tight
And hint at nausea, so judged it best
To ditch my meditations, try to breathe
More deeply for a while; sincere, polite,
The crowds passed by me, drawn here to protest

That ‘incident’ of nineteen eighty-nine.
I joined the flow, then chose a place to stand
Towards the pitches’ edge, and noticed how
Arrivals formed up neatly line-by-line—
A gentle army, one with no commands,
Except perhaps those issued from below.

I stood like this until the vigil’s end,
Anonymous, no thirst or appetite,
And listened to the speeches, chants and songs—
Nine-tenths of which I couldn’t understand—
Saw heads bow three times, heard a mother talk
About a clear-faced son; and all along

The margins of the park cicadas chirred,
The sound like static or incoming waves.
It rose and fell, a restive background track.
As heat, humidity and jet lag blurred
The evening to a haze of candle flames
Their cry continued, always at my back. 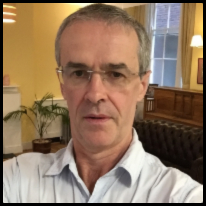 Ian Heffernan was born just outside London, where he still lives. He studied at University College London and SOAS and works with the homeless. His poetry has been published recently in High Window, Ink, Sweat & Tears, Cha, Antiphon, South Bank Poetry, London Grip, Under the Radar, FourXFour, the Moth Magazine, among other places.